Alexander Guttieres Esq. (Licensed to practice in the USA and Italy) 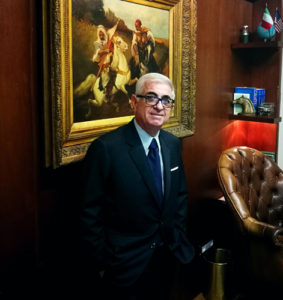 In 1994, Mr. Guttieres obtained his second law degree from the Università La Sapienza di Roma and was admitted to practice law in Italy in 1996. For over ten years he was associated with the Studio Legale Internazionale Mario Guttieres & Laura Remiddi, a prestigious international law firm founded in 1964 by his father, Mario Guttieres, a renowned and esteemed attorneys in Italy.

The professional experiences acquired by Mr. Guttieres during the years he was employed in his father’s firm in Italy perfectly complemented those gained previously while practicing in the United States, and were essential in forming his background as an international attorney.

Mr. Guttieres’ diverse culture and professional background make him uniquely qualified to provide effective and comprehensive representation in civil claims, family controversies, and commercial transactions that raise international issues. During the course of his wide-range international practice, Mr. Guttieres has been involved in complex litigation and arbitration, as well as numerous commercial ventures and transactions throughout the United States, Europe, and the Middle East.

As a family law practitioner, Mr. Guttieres has assisted many clients throughout the world, including public figures involved in high profile disputes. Mr. Guttieres’ extensive professional experience in both the Anglo-Saxon Common Law System and the European Civil Law System, combined with his international background enables him to communicate with foreign clients in their native languages.

Throughout his career, Mr. Guttieres has taught and lectured extensively in various universities, international conferences and symposiums, and has acted as legal consultant for several of the leading television news broadcasting services in the United States, Italy, and the United Kingdom.

This website uses cookies to improve your experience while you navigate through the website. Out of these cookies, the cookies that are categorized as necessary are stored on your browser as they are essential for the working of basic functionalities of the website. We also use third-party cookies that help us analyze and understand how you use this website. These cookies will be stored in your browser only with your consent. You also have the option to opt-out of these cookies. But opting out of some of these cookies may have an effect on your browsing experience.
Necessary Always Enabled
Necessary cookies are absolutely essential for the website to function properly. This category only includes cookies that ensures basic functionalities and security features of the website. These cookies do not store any personal information.
Non-necessary
Any cookies that may not be particularly necessary for the website to function and is used specifically to collect user personal data via analytics, ads, other embedded contents are termed as non-necessary cookies. It is mandatory to procure user consent prior to running these cookies on your website.
SAVE & ACCEPT